Warning: "continue" targeting switch is equivalent to "break". Did you mean to use "continue 2"? in /home/dqiukjev/public_html/wp-content/themes/uncode/partials/elements.php on line 909
 WALL - StudioKGB 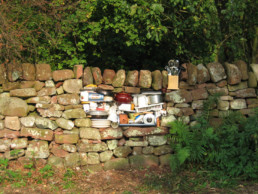 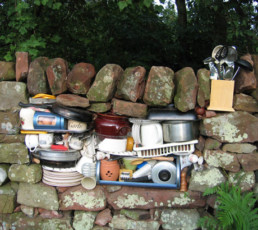 For two weeks during October 06 visitors to Melmerby were presented with a curious addition to the village green landscape. Passers by will have noticed a colourful section of dry stone wall, replaced with domestic objects usually found in the kitchen.

The objects – plates, bowls and pottery, spoons, sieves and cooking utensils – were placed in the wall for just two weeks.

The boundary – physical or psychological – is often used as a vehicle into the ways we structure our worlds.

Wall continues this theme of sociological enquiry by placing objects into a situation with a different context, with the intention to raise responses about the juxtaposition of objects used to build the wall, and the representation of those objects in terms of function, purpose and user assumptions.

Wall was installed as part of FRED – an art invasion across Cumbria.